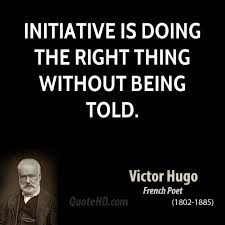 I find lot of people as very hard working professionals, however, at the same time I also find that lot of folks carry inhibitions and shy away from going beyond normal work approaches, challenging the status quo and hence not proactive enough in taking initiatives!

I strongly believe that half hearted efforts results in half hearted success. Hence, the importance of taking initiatives upfront and executing them becomes an integral core to development.
Somebody asked me recently, I am in the company for the last 4 years and still not promoted. My understanding is that people are paid to do the job they have been assigned and are promoted for building something new, fixing broken processes and taking unpopular assignments and all these needs proactive approach and ability to take initiatives!

As most of you would agree with me that an organization predominantly contains 2 kinds of employees – Reactive and Proactive. The former needs to be told what to do and they do something only after their manager/supervisor tells them to or after the need to do something has been pointed out to them. The latter (Proactive one's) are those who are willing to take initiative on their own, do what has to be done and solve problems before they actually arise.

Let’s look at what generally happens when someone takes an initiative in an organization setting.

You gain skills & knowledge, explore the unexplored and tend to learn and grow. Generally, something new will always excite you and you won’t be stuck in the same old routine without getting bored. Above all, the value addition you will do to yourself will be significant. This is all the more relevant in today’s scenario when the economy is receding and the companies have started to cut down all possible costs including people. Now who do you think they’ll keep – in my view, the individual who is more versatile, adaptive and demonstrate 'bias for action'! Think about it….!!

In addition, one will be able to develop a sense of independence and creativity through different initiatives. The risk taking capabilities tends to get generated which is a prerequisite for setting up a strong foundation for larger success.

Employees who focus on their routine jobs and don’t go beyond the obvious are not aware of the folded and hidden opportunities and hence remain in same roles for larger period then they ideally should have!

I would like to leave you with this thought – “Success comes from taking the initiative followed by persistence. A simple action taken today can produce a new momentum towards the success in your life”.
Posted by Raj Gupta