Dedicated to my revered Leaders 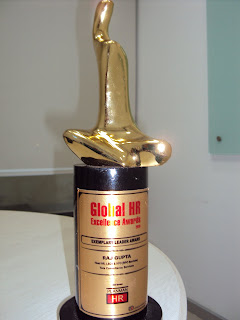 I was bestowed with Global HR Excellence 2010 “Exemplary Leader Award” at the Asia Pacific HRM Congress held on 3rd -4th September'2010 at Bangalore. While it is a great honour & recognition of my contribution in HR Arena / fraternity at large, the credit goes to my revered Leaders who guided me during my decade & half journey and helped me build solid foundation for a fine career.

Having worked in Operations for more than half a decade, I started my career in HR under Srikanth Karra (GE Capital) who helped me get a solid foundation & played a key role in guiding me at various steps through the HR Value Chain and set me up for success.
There are other people who are responsible for helping me expand and further build on the fundamentals during my HR stint with them. I must mention Atul Chugh (GE Capital) who played a key role in shaping up my attitude towards challenges and gave me the word “bindaas” and exhorted that “always be assertive & never play safe.” I also learned the value and importance of participative management under his auspices.
I must say that Vineet Sharma, Senior Leader at GE Plastics, with whom I started my GE career in 1997, has a huge role in making me what I am today and what I shall be in the years to come. He gave me confidence while showing unparalleled trust and allowed me to experiment and innovate. He took fear out of me while dealing with numbers and played a crucial role in giving me cross functional exposure. Vineet says through the LinkedIn : -

“Raj has been an example of high value-based leaders who help promote a culture of excellence in the organization. He has been one of the finest persons with highest degree of professional integrity and commitment in his assigned role. Raj demonstrates a 'can-do' approach and maintains a highly positive mindset to deal with all challenging situations that come his way. He is one person I would love to have in any team that I am on and would feel very optimistic about achieving the desired results”.

When Vineet says so, a whole lot of credit goes to him for turning me into a successful professional and over and beyond - a fine human being.

I also happened to attend one of the leadership sessions of Vivek Gaur (GE Capital) where he talked about ingredient to become a successful leader irrespective of function you operate in. They remained my bible and have helped me walk past various professional challenges. Thank you Sir for all the learning, guidance and inspiration to do well!
I can’t afford, not to mention Rohit Bhayana (GE Capital) & Nipun Bhatia (Xchanging) who kicked me hard & played a catalyst role in transforming me as a Business Manager.

Thank you Rohit & Nipun for your trust and all the learning!
I am also thankful to Lex Hoekstra (GE Plastics), Sanjay Kapoor, Ashish Khera, Joan Amble, Pratap G, Biplab Adhya, Pranesh Sarangi, Piyush Mehta (GE Capital), Sriharsha Achar (Xchanging) and all other Leaders, peers and colleagues (whose names are not mentioned here) I have had the privilege to work with for adding to my experiential learning in progressive realization of worthy goals.
Last but not the least, I must thank Ranjan Bandyopadhyay, Global HR Head, TCS BPO for showing confidence and nominating me for such a coveted award within few months of my joining.
I also owe this success to my parents and wife for being my inspiration and for standing behind and besides me during this journey.
Posted by Raj Gupta

Email ThisBlogThis!Share to TwitterShare to FacebookShare to Pinterest
Labels: Seminar