FOCUS on competing with Thy self - Rest will fall in place...

"It's not what's happening to you now or what has happened in your past that determines who you become. Rather, it's your decisions about what to focus on, what things mean to you, and what you're going to do about them that will determine your ultimate destiny." Anthony Robbins

I have come across end number of folks who work overtime to impress their relevant stakeholdres and leave no stone unturned to make their God (Boss) happy. In my early days in GE, once I was very unahppy with my Boss and I shared the same with one of my peer and said to him, buddy, "I disagree with him and he is not ready to listen to my point of view. Either he should convince me or get convinced". 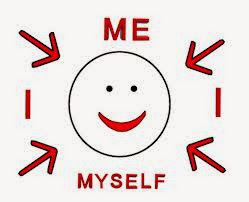 He then turned to his desk, took out his diary and showed me a page where at the bottom a quote was written. He made me read the quote which said - "GOD IS GREAT, BOSS IS GREATER" .  I agreed with him at that point in time, however, there was an angst which continued and evolved into an implicit and tacit determination resulting in a decision to FOCUS on Thy self - making my own self proud of doing what I am doing, setting my own performance benchmark and exceeding them, make sure that I am happy with my work...rest will fall in place. However, for majority  of people their single  minded focus remains to look good in their Boss eyes, and all their energies are directed towards and for them. May be for the right reason.

I came across a situation which echo the same sentiments and thought to share with you folks. The situation is as follows : -

Ria was working in in a reputed organization as front line HR Manager and one fine day she went to her Manager and said, “Boss, I think I am underutilized, can you help me enhance my role”.  The boss was bit surprised to hear this and agreed to meet with her once he returns back from his travel.

Meanwhile, she also confided to  Ryan (her coach) that despite her spending most of time in chit chatting with opreating managers, leaders and staff and sharing an excellent repo with most of the them, stake holders continue to escalate issues against her which make her boss feel unhappy. Also she felt that her peer group kept barging into her work space for no rhyme or reason. Hence was bewildered as to why there were escalations and how to make stake holders including her Boss happy while taking peers along.
Ryan, told her to share with him her objectives.  Having gone through Ria's objectives, he told her "Looking at this document, it seems your plate is more than full. Let’s pick up few of your key deliverable and review the status.


Ryan asked her, "was she meeting all the people who were anticipated to attrite? were people issues visible to Process Management so that they could be resolved? was she meeting her targets w.r.t. employee one on ones, were programmes launched in the unit running well?" and she did not have answers to any of this. Ria being front end HR resource, should have been thorough and should have this on her finger tips.  It later transpired that Ria was primarily working on ad hoc tasks and issues and was not focusing on the objectives that were integral to her role.
It is imperative that at staff level, we focus on building our base and ensure that we are detail oriented. When it comes to HR engagement function most of us think that chit chatting with Business and building personal rapport is enough. It is indeed a matter of despondency that some of us prefer working at superficial level and do not understand the essence and importance of various programmes and practices which are formulated to address the requirement of Business and people who are supporting the business.

It is also imperative to understand the power of focusing our energy on right things and not getting unnecessarily worred about others trying to damage your reputation or doing you some harm.  People choose to handle such situations in different ways. Some people love to blame others. however, it is nothing but waste of time. No matter how much fault you find with others,  it will not change you. The only thing blame does is to keep the focus off you when you are looking for external reasons to explain your unhappiness or frustration.

Some of them would use their defense mechanism to safeguard themselves.  However, most effective option would be to focus on yourself - how could I do it better, what improvement can I bring in self, could I have had handles the situation differently etc..  It is a known fact that positivity in thyself inculcates positivity in others.

We should be willing to demonstrate a culture of caring, sharing and going that extra mile to help others irrespective of their reaction or response. If you do something good and appreciate the deed of people who hold grudge against you, no matter, how deep is the grudge, over a period of time, the edifiice of grudge will start crumbling to an extent, if people have back-stabbed us in the past, they will certainly feel ashamed and fall in line, however we should not deflect from our key focus area.

One thing I have learned that we can only change ourselves and for this to happen, it is inevitable that we start looking at ourselves and problems within, rather than outside. Like Saint Kabir says
"Bura jo dekhan mai chala, bura na milya koi,
Zo dil khoza aapna, mujhse bura na koi"
We need to understand that most of the times we are not underutilized however, we are the ones who are underutilizing ourselves.  We keep working to make others happy however the mantra to self satisfaction and success is that we work for ourselves.  I remember a dialog from a famous movie I am forgetting the name :  “Zamana hum se hai, hum zamaane se nahi”
If this attitude becomes part of our life we will never falter. However, this needs excessive and obsessive focus on thyself.
Posted by Raj Gupta