Must know for HR....Basic understanding of Business Finance - Part 1

"It sounds extraordinary, but it's a fact that balance sheets can make fascinating reading." Mary, Lady Archer (1944–), British scientist 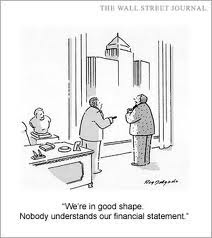 In my articles on Leadership, Competencies and Development I have always maintained that Business acumen is the key aspect for all round development for HR Managers / Leaders. We all know that Finance is the language of Business and we must have conceptual understanding of financial terms including Balance sheet, EBITDA, Gross margins, net income, ratios etc, however, we find majority of HR folks are not good at it and in the past this has played a key role in ensuring that HR do not get counted first amongst the equal amongst CEO's / Boardrooms.

Before I take this forward, I would also take this opportunity to express my gratitude to Anubhav Talwar & Shailesh Bhardwaj from Finalyst Partners, who helped me in putting this together.

Before we get into the details of finance terminologies, it is imperative that we have a broader understanding of some general economic terms which are as follows :-

Bank Rate : - Everyone assumes that everyone else truly understands the central Bank Rate term, sometimes called the Discount Rate. Some people understand that it affects some mortgages however do not know why. The Bank Rate is set by the Central Bank(RBI) as a means to control the economy. Lower rates are used to promote lending and higher rates are used to keep down inflation. The rate also affects the relative value of the country's currency. This is because the bank rate is the rate that the Central Bank charges banks for secured overnight lending. However, unlike the assumption made by some people, this doesn't mean that the Central Bank is actually lending the sum total of the money supply in the economy. What they are in fact doing is trying to affect the interbank rate and therefore the cost of the banks business operations. It does this mainly through open market operations, where it buys or sells short-term government bonds from banks and when it pays out or collects payment for these bonds, it alters the amount of money in the economy, while affecting the price (and thereby the yield) for short-term government bonds. This in turn affects the interbank interest rates.

Recession : - This is an overused and alarmist term. Things can be OK whilst in recession or terrible whilst not in recession. A recession is simply defined by two consecutive quarters of negative growth for an economy. Recessions generally occur when there is a widespread drop in spending. Governments usually respond to recessions by adopting expansionary macroeconomic policies, such as increasing money supply, increasing government spending and decreasing taxation

Gross Domestic Product (GDP) is the value of all officially recognized final goods & services produced within a country in a set period. GDP / person is considered an indicator of a country's standard of living.

Government Bond : - Government debt is money owed by any level of government. These bonds have a Coupon or Coupon Rate and this is normally defined as a percentage that leads to periodic interest payments. The bonds also have a maturity date at which point the government will repay the face value of the bond. Bonds are traded after issue with the price being determined by the creditworthiness of the government, sentiment, the period left before maturity and the attractiveness of the coupon. Yield is found through buying bonds under face value. For example, a Rs.100 bond with a 5% coupon bought at Rs.95 will produce a yield of 105/95 = 10.5% per year plus an upside of Rs.5 at maturity. However, if the government had its credit downgraded (Greece for example) and stopped paying the coupon, or tried to renegotiate said bonds, then such a purchase would be less attractive. This is the way of the bond market.

Quantitative Easing (QE) : -You may have heard this term recently in relation to the US economy. The Federal Reserve has been doing it as it can't really cut interest rate much further and it wants to stimulate the economy. QE is a complex method of printing money and adding it to the economy. It is done by buying assets, usually financial assets such as government and corporate bonds, using money it has electronically created.

The institutions selling those assets will then have new money in their accounts, which then boosts the money supply as those institutions will, in theory, be willing to lend more and thus increase the amount of activity in the economy.

The other effect is on the cost of borrowing. When a central bank buys bonds, it reduces the supply of those bonds in the economy. That should increase the demand for new bonds and, at the same time, make it cheaper for businesses to borrow due to changes in long term rates.
In my next post, I will share the basic financial terms. Watch out the space!
Posted by Raj Gupta