"The leaders who work most effectively, it seems to me, never says 'I'. And that's not because they have trained themselves not to say 'I.' They don't think 'I.' They think 'we'; they think 'team.' They understand their job is to make the team function. They accept responsibility and don't sidestep it, but 'we' gets the credit.... This is what creates trust, what enables you to get the task done." - Peter Drucker 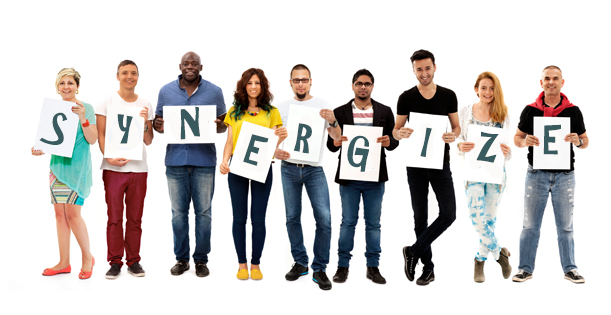 Synergy in the context of business is the benefit derived from combining two or more elements so that the performance of the combination is higher than that of the sum of the individual elements. Getting good players is not as difficult a proposition, as making them stick together to achieve common objective. Not everybody likes what you do as a Leader and understand the significance of your action at the start itself, howsoever, good or great they are and in some people there is a strong urge to criticize and find fault without providing alternatives. I have seen great leaders reinstating in their  team that if you feel an urge to bad mouth about someone then better it be me than you doing it for each other.  I think the reason for making such a statement is somewhere in their roots as they have been made to believe throughout their career that you can be a great leader and your teams can be progressive if right synergies are created.
People should work with each other rather than working against each other and they will always be winning teams.  If you can relate there was a very famous film of Shahrukh Khan “Chak De India” and the whole films plot was based on the same methodology.   Throughout the movie he worked upon creating synergies within his team and in the end he categorically mentioned that they will not be able to win the finals if any of the players is playing against another team member and not with him.  That is the power of synergies.
I, at times, wonders as to why some leaders practice an entirely opposite methodology adopted by Britishers “Divide and Rule”.  I am still not able to figure out. Is it the lack of confidence in the team and their capabilities or an autocratic style of working or self insecurities which make them do so?.

In such scenarios people tend to get engrossed in forming associations depending on where the power center is.  They would project themselves as loyal and informers to the Leaders and such Leaders would see the picture from their eyes rather than being in touch with ground level reality.  Decision making would be biased and there would be dissatisfaction in the whole environment.  The time which should be involved in positive thinking is unnecessarily wasted into conflicts, justifications, blame game and doing damage control.  Not sure if some personal aspirations are met however it is rest assured that Organization suffers in the long run.  We would witness that in such situations the top performers who are away from such political dynamics and focused on performance and growth get frustrated and either retreat in silos or quit.
I do believe that growth can be best gained when we stay progressive and take the teams along. There are always 2 ways to make a line look longer than the other, either you rub one line short or extend the other line parallel to it and make it long. My experience suggests that the later is better as it is progressive. The moment you stop making efforts to grow, become stagnant and indulge in the practices which are not conducive you would be surrounded by insecurities and you will not just do damage to yourself and to all the people associated with you but to the Organizational as well. We must never forget that teamwork is a critical function for organizational success and personal fulfillment.
Posted by Raj Gupta