The thing about performance, even if it's only an illusion, is that it is a celebration of the fact that we do contain within ourselves infinite possibilities. Sydney Smith 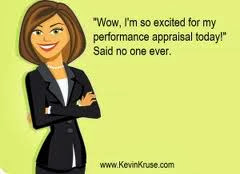 Having been part of HR fraternity for quite some time,  I keep wondering if much feted performance management system is serving the purpose they were built to serve across the industry. While I agree there may be pocket of excellence - some organization doing it better than others.

I have not seen too many Managers who would refer to last year development plan wherein they would have had a stake to enable development of an employee while kick-starting the discussion for the current appraisal. Last appraisal once done tend to become a history.

I had an opportunity to appraise the performance appraisal of large number of employees and see how smartly the goals are set - are they measurable, time bound, realistic and to my utter dismay and surprise, majority of the objectives were more like activities without having measurement around them.  When discussion take place on such obscure goals, life become difficult for managerial community as they are asked to Force Rank people to arrive at pre-set curve i.e Top 20%, Solid 70%, Needs Improvement - 10%. This will vary from organization to organization, some will have 3 level ranking, some will have 4, some will have 5 and %age to fit in the curve will also differ.

As we all know, historical objective of performance appraisals is to help employee understand his strengths and development need and accordingly create a training to bridge the gap. Now the questions come to mind :Do employee look forward to performance appraisals to get feedback and development plan? In majority of the cases, Answer is No. - What they look forward to is Ratings and basis those ratings what would be their increment / bonus.  Let us look at following cases : -

Case No. 1  : Mike is a successful Trainer at Company X. His five-year performance record is exemplary. He is the highest rated trainer in his large team. When it came to performance appraisals, Mike enjoyed the complete confidence of his former Manager. Appraisals were informal and pleasant – a yearly housekeeping matter that lasted less than 30 minutes from start to finish. But, all this changed when Mike Manager left the organization.

His face to face discussions with his new Manager were minimal, however, Mike remained un-alarmed given the absence of developmental feedback and complaints. Even when the new performance planning and review system was announced, he was at ease as he had no cause for concern basis his past performance and current delivery and reputation that was impeccable.

Entering into his new Manager’s office on the day of his appraisal, he felt secure at first, knowing he dutifully completed his self-evaluation and performance goals. After a few opening pleasantries, the Manager handed Mike the completed appraisal and began to sell his assessments on each performance dimension without inviting Mike to comment or provide input.

There was no mention of his self-appraisal or development goals. He received an overall satisfactory rating with two documented incidents by disgruntled trainees for poor course organization and delivery.

Mike was extremely pissed off and sat in stunned silence as the remainder of the appraisal was read without mention of his past years of loyal service and successful job performance. He was assigned new performance goals and standards, including a 25 percent increase in classroom contact, and recommended a three percent raise – the lowest of his five years with the company.


Case No. 2 : It was Monday morning , Daisy was apprehensive when she reached office. Today was the day to decide on her yearly performance rating. She was working as senior executive at XYZ corp for the last few years. Last year she was the top performer in her group of 12 executives, however, she moved to new role 6 months back. She has worked sincerely putting her time and energy on the deliverable which she was supposed to complete. The day will either bring confidence, trust & motivation for her or will make her feel demotivated, exhausted and disinterested. There were few thoughts flashing across her psyche which kept her occupied while waiting for the Manager : -
Well, this is not the case of only Mike or Daisy. This is quite common in corporate world where we are appraised half yearly or annually.

This brings us to the questions as to why performance appraisal which should have help employee develop and get better and hence contributing in increasing organizational vitality has become a tool which creates fear and anxiety amongst large section of employees. In my next post, I will touch upon the reasons as to why employee dislikes Performance Appraisals. Watch out the space!
Posted by Raj Gupta