Success is all about imagining possibilities rather than rationalizing current realities 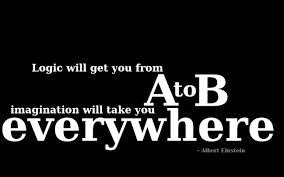 In psychology and logic, rationalization (also known as making excuses is a defense mechanism in which controversial behaviors or feelings are justified and explained in a seemingly rational or logical manner to avoid the true explanation, and are made consciously tolerable – or even admirable and superior – by plausible means.

To achieve extraordinary results, ordinary people need to endure extraordinary hardships and get transformed in the process. When we look at organizations, mindset of leadership is to keep doing what has been successful then and working around improving the baseline and rationalizing the same instead of questioning the status quo and imagining what could work better now. We all know change is inevitable and as long as we can create alternatives and imagine additional possibilities and perspectives at a time when obvious would be oblivious, we will thrive else it will become difficult even to survive.

It becomes imperative every now and then that we think beyond the obvious and throw limitation out of window and start thinking about things that would be considered impossible as impossible also says i m possible... As Mahatma Gandhi said, “Man often becomes what he believes himself to be. If I keep on saying to myself that I cannot do a certain thing, it is possible that I may end by really becoming incapable of doing it. On the contrary, if I have the belief that I can do it, I shall surely acquire the capacity to do it even if I may not have it at the beginning.”

Majority of the inventions worked on the same principal and people of those times thought these visionaries were foolish and unrealistic. We now know where we are because of them.

We all know what Facebook has brought to the world, it has connected people who could never even think they could connect. But few thought even bigger and different, they created that experience just by click on your phone. So what Whatsapp did was many steps ahead of facebook so much so that Facebook had to buy Whatsapp to thrive in business. This world has experienced transformation because few people think differently.

Steve Jobs is another example of our times who always would do something which the world would never imagine. He would hire musicians, theater artists or people in that field with relevant experience and believe that they have a better creative bent of mind than others and would be able to make the difference, his famous quote being “While some see them as the crazy ones, we see genius. Because the people, who think they are crazy enough to change the world, are the ones who do.”

Alternative is the virtue of creativity however you need to have that mindset. I have experienced leaders setting targets which may seem un-achievable and people around them would laugh, however, the difference is made when you think differently and then the mind also starts working to create possibilities for the impossible.
Posted by Raj Gupta