Gender Pay Disparity - We must bridge the gap to take India forward... 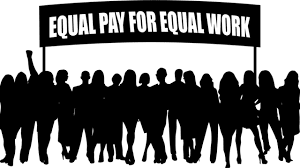 "It's indisputable that there's a real pay gap. People can argue about how big, but that's almost besides the point. The point is that every woman, every girl, deserves to get paid what they're worth." —Sheryl Sandberg.

The recent headlines - Google Sued by 3 Female Ex-Employees, Who Say It Pays Women Less than Men drew my attention to dwell on Gender Pay Gap issues.

During my stint in United Kingdom, I found lot of Media coverage on the captioned, however, in India, the issue is still not at the forefront of Media / Corporate discourse while significant progress is being made in Euopre, UK and USA to draw policy makers attention towards Gender Pay Gap issues.

For uninitiated, The gender pay gap is the average difference between a man's and a woman's remuneration. There are two distinct numbers regarding the pay gap: unadjusted versus adjusted pay gap which takes into account differences in hours worked, occupations chosen, education and job experience. Gender Pay gap in United Status has been summed up well in the below quote.

"We need to stop buying into the myth about gender equality. It isn't a reality yet. Today, women make up half of the U.S. workforce, but the average working woman earns only 77 percent of what the average working man makes. But unless women and men both say this is unacceptable, things will not change." Beyonce.

United Kingdom, Equality Act 2010 was augmented with regulations which require Employment Tribunals to order an employer to carry out an equal pay audit where the employer is found to have breached equal pay law. In the United Kingdom, the aggregate gender pay gap has been on the decline and even reversed for certain age groups. Further, April 2018 onwards employers with over 250 employees will be required to publish data relating to pay inequalities. Data published is to include the pay and bonus figures between men and women, and will include data from April 2017.

A recent survey of international employment law firms showed that gender pay gap reporting is not a common policy internationally. Despite such laws on a national level being few and far between, there are calls for regulation on an EU level.

Now let us dwell on what is happening in India.

India has been a permanent member of the ILO Governing Body from 1922. In September 1958, India ratified the C100 Equal Remuneration Convention, 1951, which addressed the issue of equal pay between men and women for work of equal value. This convention requires all member states to direct their national laws and policies towards guaranteeing equal remuneration to all workers, regardless of gender. In an attempt to ensure compliance with this convention and in response to the Report by the Committee on status of women in India, the government enacted the Equal Remuneration Act 1976, In India, the Constitution also recognised the principle of 'Equal Pay for Equal Work' for both men and women, and 'Right to Work' through Article 39(d) and 41.

Further, while analyzing the level of female participation in the economy, a report slots India as one of the bottom 10 countries on its list. Thus, in addition to unequal pay, there is also unequal representation, because while women constitute almost half the Indian population (about 48% of the total), as their representation in the work force amounts to only about one-fourth of the total.

According to Monster Salary Index 2016, women on the whole still make 25% less than men, and as many as 68.5% of women in Indian workforce feel they have experienced wage inequality.

There is no country on earth where women make as much as men for the same work, according to the World Economic Forum. It predicts the global gender pay disparity may take up to 170 years to close. The pay data for India certainly isn’t bucking this trend in spite of Equal Remuneration Act coming into force in 1976.  Unequal pay dogs working women in India.

If we want to eliminate the pay gap and perhaps even reverse it, we should bring discourse in the mainstream and at the forefront of corporate governance. While doing so, we must also pay attention to women’s continuing difficulties in balancing work and family life.

It is imperative that we pay attention to Gender parity with renewed vigour and sense of urgency as it will not only accrue business benefits however, also provides thrust to India's economic and social firmament.
Posted by Raj Gupta