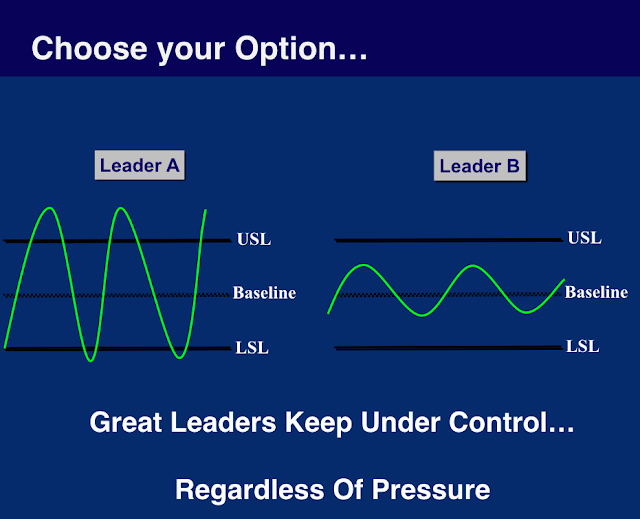 EXAMPLE OF LEADER 'A'

I do not want to see you in this Organization from Monday, SHOUTED one of the Senior  Leader on Friday late night" during my founding years. I asked, "what happened? Why are you so angry"? He said,"keep your MOUTH shut. I do not want to hear any excuse. then he banged the door and went out".


Being a Junior resource, I was at a loss initially. Upon digging the details, I found that some operating leader complained to him about some data issues and after coming from his office, he just launched.  After an hour, I called him and said "I have found the issue and have sorted it out. The mistake was committed by a senior colleague by oversight and I personally have nothing to do with it. He heard me and said, OK.


Monday, I met him expecting that he will express regret for his behavior and asked him, "Do you TRUST me"? He said, "on the trust scale, sometime I found  you 7 and at times 3 or 4". I said, "TRUST is a TRUST, either you trust or you don't. Anyway, I have LOST my TRUST in you. I love this company. Will you find me another job or should I find myself"?  I did find another job....

EXAMPLE OF LEADER 'B'

I saw this BOSS of mine first time wearing a necktie with an impeccable suit. He was supposed to make a presentation to C suits Executives that included his Bosses Boss. The presentation was scheduled at 9.30 AM winter morning in late 1990's.

I reached office at around 9.15 AM and then he asked me to quickly take the OHP print out. (An overhead projector [OHP] is a machine that has a light inside it and makes the writing or pictures on a sheet of plastic appear on a screen or wall. and rushed for a meeting).

At 9.30 AM, he called me from reception and asked where are the slides. As it was winter and our computers were not that fast, it took ~ 10 minutes for it to warm up and after 3 slides, the plastic sheet  got stuck in the printer. I told him that I have taken print out only on 3 sheets and he said, bring the sheets.  I took 3 sheets and gave it to him and he said, "give the rest to MD's secretary" and I did so.

After the meeting, he came to me and congratulated, Thank you Raj, thank you so much. It went very well and credit goes to you!

I said, "sir, it seems there is something wrong with you or you think I am  a politician son". He asked what do you mean". I said, "instead of SHOUTING at me, you are congratulating me?" He asked, "why should he be shouting at me?" I said, "I did not get you the print on time, what if, other prints would not have come out".

He said, "then it is SHAME on me if I can not present about my function without  PPT's. I have no reason to SHOUT at you as I TRUST you! Do I not know that you come by bus and would have started 30 Minutes early. Were you not here till 9 PM despite being unwell yesterday and worked on creating the presentation". I said, yes "I did start 30 Min early but there was much of rush. I could not get into the bus".

"Now you understand Raj, that I do not have any reason to get angry with you, rather you did the best that you could and hence credit goes to you for making it a success", he said.

Through these and various others positive  or not so positive incidents that I came across during my formative years, I learned a lesson that when I am going to be in a position of authority, in all situations, I MUST

1. Instead of reacting, reflect and then respond
2. Either you Trust or you don't.
3. As a Manager, always remain in control and  maintain your EQUANIMITY
4. If you make a MISTAKE, accept it and say SORRY -  it will only enhance your stature.
5. Act on your GUT FEEL fearlessly.
6. Know your function well and always be ready to present with or without PPT's.
Posted by Raj Gupta