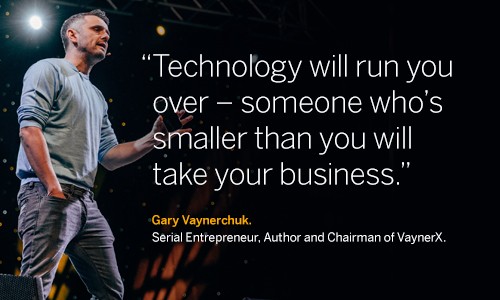 Success was never permanent, but never more so than today. Life has transformed for everybody. People live and work differently than what they were used to. Online platforms have become not only central to work-life but also to education making students to align themselves with new normal, as is the idea of work from home. The pandemic is restructuring social interactions and metamorphosing social bonds. Businesses are no exception and going cataclysmic shifts.

A latest study by researches quantifies just how quickly high-flying companies fall back into the pack, with some plunging to the depths of their industry sector in record time. However, with the right mind-set and strategic approaches, the competitive advantage of only few companies persists.

A major Question that arises in front of us is

Why only few companies shows right mind-set, Strategic approaches and Competitive advantage?
Terms such as ‘volatility’ and ‘disruption’ are often used to describe a world in which competitive advantage is increasingly difficult to maintain. The extent of such volatility and disruption is quantified ina Boston Consulting Group study that examined the performance record, relative to their competitors, of 20,000 companies over a period of 40 years. The researchers looked specifically at the decay rate of sector leaders - that is, how quickly top performers lost their advantage over the average performers in their industry.
Let’s take the example of a company whose annual total shareholder return (TSR) reaches a level that is 20% higher than the sector average. However, in the following years, the company’s advantage has a 50% decay rate. In other words, the company watches its advantage decrease by 50% every year: the 20% TSR advantage is cut in half the first year to 10%, cut in half again the following year to 5%, and cut in half to 2.5% the year after that. With a 50% decay rage, the company’s TSR falls in three years to barely above the average TSR for the sector.
Several decades ago, the decay rate for leading performers in a sector (that is, those in the top 20% of the industry) was not as dramatic as 50%. From 1980 to 1985, for example, the decay rate for the best performers was approximately 15%, which meant that high performing companies might slowly, over a number of years, lose their advantage over the average performers.
For the past 15 years, the ability of companies to sustain their performance advance is dramatically different. On average, top performers have shown a 100% decay rate in TSR. The BCG researchers also confirmed that the shareholder metric, which could be influenced by such factors as changing shareholder expectations, is not skewing the results. Companies fail to maintain their advantage over the sector average on other metrics such as revenue growth, EBIT margin and return on assets.
In an age when competitive advantage was built on nearly immovable assets, including size and capital, sector leaders sustained their advantage. With dynamic competitive factors such as innovation and new technologies making the difference today, no competitive advantage is safe for long.
BUSINESS APPLICATION : Of the companies whose performance results over five years (2008-2013) put them in the top quartile of their sector, an astounding 83% would tumble from their perch in the following five years (2014 – 2019), showing a 100% decay rate. However, the remaining 17% would only suffer a meagre 5% decay rate during those same years.

Given the almost frenetic volatility of the digital age, how can some companies maintain such an advantage?

We firmly believe that the companies who constantly search for new sources of competitive advantage are the only ones who can maintain such an advantage for example : Apple and Google.
Further companies can defy, “the gravity of average performance”, by taking care of following factors in account :
Agile & Growth Mindset
No competitive advantage, no matter how strong it may seem, is immune to sudden industry disruption. Don’t sit back and wait to be knocked down; pre-emptively look for the next best thing.
Watch Out Your Success Metrics
Growth and market share figures help for the present but don’t prepare you for the future. A better metric: how much of current revenues are based on recently developed offerings vs. offerings that were developed further in the past? If the ratio favours recently developed offerings, the company has a better chance of maintaining its success.
Use Two Sets of Strategies
Strategies focused on the present, such as fine-tuning the delivery of offerings, should cohabitate with strategies focused on the long term, such as the development of new offerings based on emerging technologies.

Shorten Product Life Cycle
As the product life cycle duration has been shortened in the digital age thus Pace is the most important P for organizations apart from Other P’s like Product, Place, Price and Promotion.

Opt for Planned Change than Forced Change
Companies should anticipate about the changing business environment and accordingly keeping in mind the future needs must opt for planned change rather than sitting idle and waiting for changing business environment to largely impact them and then go for forced change. Education Industry is one such example which is undergoing forced change - a monumental shift in conventional Education, re-examining the architecture & eco-system of education where EdTech is taking a centre stage and revolutionising the whole learning landscape.

Be Smart About Your Exit Strategy
It is imperative for businesses to pay renewed attention on their businesses / Offerings exit strategies. There is no point throwing good money after bad.

This article has been written jointly by Raj Gupta & Dr. Arun Sachar, who also collaborated to write the Book Titled - Go & Get Your Success - A Kaleidoscope of Leadership Models that Unshackles Usual Patterns.
About the Author -
Raj Gupta, Author of Multiple Books & Award-Winning HR Leader with 25+ Years of Experience
Dr. Arun Sacher, An Educationist & Management Consultant with 30 years of experience with Top multinationals and premium academic institutions. Author of Many books & research articles.
The article was originally published on LinkedIn.
Posted by Raj Gupta